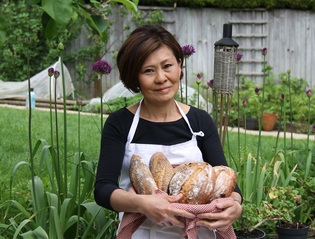 I was born and raised in Kobe, Japan where the famous "Kobe Beef" comes from. The food culture in Japan is very strong and I learned how to cook from an early age as my parents always spent time cooking together with me.  When I was young, I wanted to be a pianist, but I ended up studying Japanese Civil Law at university instead.  After having graduated from Uni, I went to Hong Kong to join Cathay Pacific Airways because I wanted to see the world. How bizarre! My job was nothing to do either with music or law. As a result of my job, and being based in Hong Kong, I met many different nationalities and had a chance to enjoy many interesting cuisines while travelling.
After having got married to my English husband, his job took us from Hong Kong to the Middle East, to Belgium and to England where I have been since 2003.

When I moved to England, at first I struggled to get good bread, good Japanese food and other cuisine that I wanted to eat. However I always cooked for my family as I believe that home-cooked food is the best thing. After raising my children, I began learning bread baking at various classes including "Le Cordon Bleu London.  For Japanese cookery, I recently attended a class at "Tokyo Sushi Academy" for making Sushi.